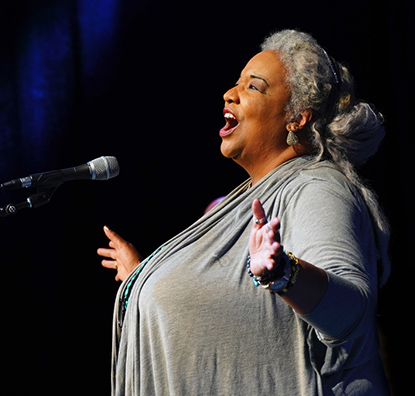 A blend of jazz, swing, funk, and Colombian rhythms

The Convergence Quartet balances an artistic tightrope blending a variety of music that is innovative and exploratory as well as accessible and groove-oriented. Leader Eugene Uman uses this group to present his own original compositions, many of which were inspired by his years living in Colombia, South America. “The intention when writing these pieces was to combine the vocabulary and swing of jazz with the edge of rock and funk and the inspiration of Colombian folkloric rhythms such as pasillo, cumbia, and currulao” says Uman.

When Houston joins the group, the vibe and repertoire embraces her penchant for singing soul and gospel music, as well as classic jazz standards.

In collaboration with The Vermont Jazz Center

Originally from Chicago, Wanda Houston grew up singing gospel music in church and with her family’s theater group. She has led an active career as an actress, performing on the grand stages of Los Angeles, Las Vegas and Broadway; she toured Europe as the wicked stepsister in “Sisterella” (for which she won “Best Supporting Actress in a Musical” by the NAACP) and has held lead roles in “Ain’t Misbehavin’,” “Hello Dolly” and “The Best Little Whorehouse in Texas.” Houston was part of the gospel group, Broadway Inspirational Voices (BIV) with whom she performed on PBS’s Great Performances and earned a Grammy nomination. She has shared the stage with Oleta Adams, Patti Austin, Eartha Kitt, Liza Minelli, Pattie Labelle, Joe Cocker, Celine Dion and Barbara Streisand. Wanda sings jazz with authenticity and passion; she is a great story-teller, too - coloring the spaces between her songs with fascinating stories of her youth and the trials and tribulations of life on the road. 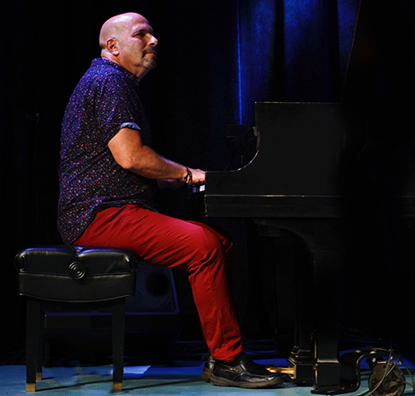 Pianist, Eugene Uman is the director of the Vermont Jazz Center where he has produced hundreds of concerts of world-famous artists and supervised its educational programs since 1997. Uman received an MA from Queens College in Jazz Performance in 1990 where he was a recipient of a Eubie Blake Scholarship; he is also a MacDowell Colony Fellow. The Vermont Jazz Center was awarded a Chamber Music America Acclaim Award. Uman is the recipient of the 2022 Ellen McCulloch-Lovell Education Award from the Vermont Arts Council. Uman has written over 250 compositions including commissioned works for the Big Band de Medellín, Juno Orchestra and Windham Orchestra. He has recorded three CDs as a leader and has also recorded with the Bob Stabach Quartet, Derrik Jordan’s Braziliance, the Julian Gerstin Sextet, Jill Connolly, The Ambassadors of Light, Los Estados Alterados and numerous others; he served as a record producer many times over. Uman has performed with Sheila Jordan, Donald Byrd, Jerry Bergonzi, Freddie Bryant, Francisco Mela, Carlos Averhoff (of Irakere), Howard Brofsky, the Vermont Jazz Ensemble, Rhiannon, Karrin Allyson, Wanda Houston and many others. Three of Uman’s original compositions were recorded by Latin Jazz star Sammy Figueroa on his 2005 Grammy Nominated CD: In Walked Sammy. 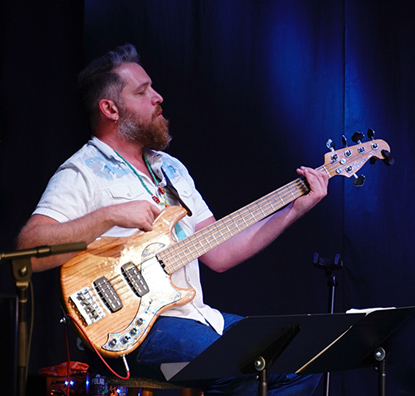 David Picchi has been performing and teaching music throughout the Pioneer Valley since 2001. He is an electric and double bass player skilled in multiple genres. Picchi is the Administrative Director for the UMass Jazz in July Summer Music Programs, teaches at Amherst College and Mt. Holyoke College and contributes to the production, performance and educational programs at the HCC Jazz Festival, Northampton Jazz Festival, and the Vermont Jazz Center. David has performed or recorded with Karrin Allyson, Chocolate Peach, FlavaEvolution, The Leah Randozzo Group, Evelyn Harris, Chuck Langford, Yusef Lateef, Kevin Mahogany, Rebecca Holtz, Samirah Evans, Charles Neville, Dick Oatts, Arturo O'Farrill, Beau Sasser, Miro Sprague and many others. 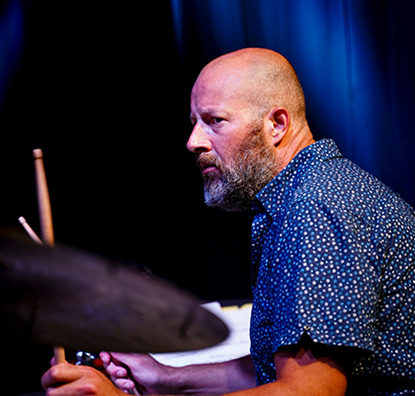 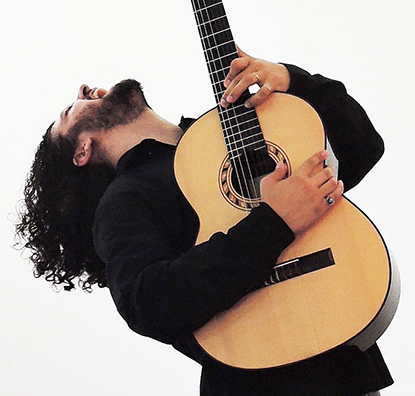 “Aaron Larget-Caplan is a riveting artist. His classical guitar performance was a treasure.”
– The Washington Post

Join us for an evening of Flamenco Music and Dance served with light Tapas and Spanish wines.
We are excited for our first event at this new gallery and arts space in Dublin.

Acclaimed international recording and touring guitarist Aaron Larget-Caplan is an exciting and innovative leader in classical music. Noted for his “astounding technical proficiency and artistic delicacy” by the Boston Musical Intelligencer, Larget-Caplan has performed throughout the USA and in Europe, Russia, and Taiwan, including El Palacio de Linares in Madrid, Spain, Sheremetev Palace in Russia, and Palazzo del Te & Ducale in Mantova, Italy. At 16 he made his debut at the Tabor Opera House and has since premiered over 110 solo and chamber compositions, soloed with orchestras, directed concert series, created commissioning endeavors, curated and published two anthologies of scores, arranged over 35 solo and chamber works, and brought classical music into schools and communities. A gifted performer and speaker, he is sought for his deft programming of new and standard repertoire, while connecting with audiences with a Bernstein-esque ease. In 2019 Aaron received a medal from the Société Académique Arts-Sciences-Lettres of Paris, France for his trailblazing work in music, and in 2020 was Musician in Residence at the Banff Centre for the Arts and Creativity.

Mr. Larget-Caplan has eight critically acclaimed solo albums on Tiger Turn and Stone Records: honey cadence (2022), Drifting (2021), A Guitar Holiday (2021), Nights Transfigured (2020), John. Cage. Guitar. (2018), The Legend of Hagoromo (2015), New Lullaby (2010), Tracing a wheel on water (2006), and he is featured four others as a soloist and chamber music for record labels Albany, Navona, and the American Composers Alliance. The recordings have received critical acclaim from Audiophile, Fanfare, American Record Guide, Guitar Magazine and many more with such response as “stunningly played” (Fanfare), "eclectic and endlessly rewarding release" (Classical Guitar), “A Significant Recording” (Classical Guitar UK). His newest recording, God's Time – The Music of J.S. Bach on Guitar will be issued in September 2022.

Aaron Larget-Caplan is the founder of numerous commissioning and performance endeavors, including the New Lullaby Project, which bridges the chasm of fear audiences towards contemporary music and composers to writing for guitar, for who's afraid of a lullaby?! Since 2007 Aaron has premiered 68 new lullabies by 63 different composers from ten countries. In January 2021, Mr. Larget-Caplan in partnership with the American Composers Alliance began publishing a multi-volume anthology featuring scores of the New Lullaby Project: volume 1 'Nights Transfigured' and volume 2 'Hushed' features 16. Three albums have been recorded: New Lullaby, Nights Transfigured, and Drifting.

Mr. Larget-Caplan's first album of his own compositions will be released in April 2022 on Tiger Turn. honey cadence features six meditative solos written in December 2021 and January 2022. The pieces explore timbre, improvisation, rhythmic fun, and are influenced by the music of John Cage and the many New Lullaby Project composers.

His groundbreaking 2 volumes of arrangements of John Cage are exclusively published by Edition Peters and are the first officially sanctioned arrangements of Cage for guitar. The American Record Guide called his transcription of Cage's 'Bacchanale' for two prepared guitar "marvelous". The Guitar Foundation of America wrote: “I would strongly advocate these [Cage] compositions to be performed by young guitarists before they start working on any other contemporary composers". Larget-Caplan also performs his own arrangements of Bach, Scarlatti, Rodrigo, and many Spanish composers. Larget-Caplan recently received exclusive permission from the estate of Reynaldo Hahn and Édition Musicales Alphonse Leduc to perform his arrangements of Hahn’s “Mélodies” for voice and guitar. Upcoming publications include music of Cage, Alan Hovhaness, Hahn, Mario Castelnuovo-Tedesco, and Pascual Marquina.

Mr. Larget-Caplan is currently collaborating with composer Vineet Shende of Bowdoin College for 12 Carnatic Preludes, After J.S. Bach, a re-imagining of Bach preludes from the Well-Tempered Clavier as if Bach were from South India (Carnatic music). Each prelude is paired with an Aaron's arrangement of Bach's keyboard prelude. Aaron is also the founder of the ensemble ¡Con Fuego! (With Fire!), a passionate cross-fertilization of flamenco dance and Spanish classical music featuring acclaimed dancer La Conja and Gabriela Granados, the trio has performed throughout the Northeast, New Mexico, Oregon, and Colorado.

From 2010-2014 Aaron directed Greater Boston House Concerts presenting 23 international artists, and his latest endeavor, “Now Musique – Exploring the New & Neglected” debuted in 2019 and will continue in 2022.

Larget-Caplan's published articles include: “Have Guitar, Will Travel – To Russia With Love”, The Triangle of Mu Phi Epsilon, and “Meet the Luthier with Sicilian Builder Franco Marino”, Boston Classical Guitar Society Quarterly. Interviews of Aaron include “Building a career through talent and savvy”, The Triangle, and “On the Trail with Lullaby Hunter, Aaron Larget-Caplan”, Fanfare Magazine where he was noted for his “enthusiasm and virtuosity”. He has given lectures Being an Artist Entrepreneur in the 21st Century, John Cage Guitar, Writing for Guitar, and Creating Commissioning Projects at universities as well as the Guitar Foundation of America, the 21st Century Guitar Conference, New Music Gathering, and for the international music fraternity ΜΦΕ. His John Cage Guitar and Legend of Hagoromo lectures were accepted to the IGRC in 2019 in Hong Kong. Aaron has appeared on numerous radio and television stations across the US including Conducting Conversations, and Classical Guitar Alive, and held online roundtables on Composing for Guitar.

Mr. Larget-Caplan has received awards and grants from the Société Académique Arts–Sciences–Lettres of France, American Composers Forum, New England Foundation for the Arts, American Composers Alliance, New England Conservatory, D’Addario Foundation, Mu Phi Epsilon Foundation, numerous Local Arts Councils, he was awarded as an I.D. LOTT – Identifying Future Leaders of Today and Tomorrow for his artistic and community work in Dorchester, and he was named an ACME Honoree as a distinguished Artist and Educator by the international music fraternity Mu Phi Epsilon. A proponent of live classical music in society and arts in education, he gives enrichment programs and artist residencies alongside formal concerts throughout the country and internationally.

Faculty appointments include the Boston Conservatory at Berklee School of Music and the University of Massachusetts Boston. He gives artist residencies, masterclasses, workshops and lectures across the country, including in Canada, Italy and Russia, for the Guitar Foundation of America, 21st Century Guitar Conference, the International Music Fraternity Mu Phi Epsilon, and the Banff Centre for the Creative Arts. He is a graduate of the New England Conservatory, and his principal teacher was Dmitry Goryachev. Larget-Caplan performs on a guitar by the French master luthier Olivier Fanton D’Andon and uses Hannabach strings exclusively. He lives in Boston where he enjoys espresso with his wife, healer and muse, Catherine.