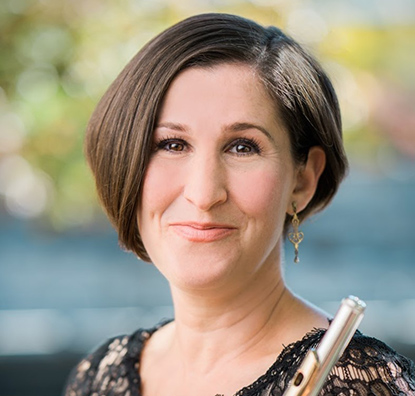 Rachel Braude, flutist and piccoloist, is an active performer and teacher in the Boston area. She can often be seen performing with the Boston Ballet Orchestra, the Boston Pops and the Boston Symphony and she currently holds positions in the Boston Philharmonic, Boston Modern Orchestra Project, Portland Symphony, Rhode Island Philharmonic and Opera Boston. She is the former principal piccoloist of the St. Louis Symphony. An active teacher, she teaches at the New England Conservatory of Music (Prep Division) and maintains a private studio. Former teaching positions include the University of Massachusetts (Boston) and Rhode Island College. Rachel is a graduate of the New England Conservatory of Music and the Juilliard School and her principal teachers include Trevor Wye, Bradley Garner, Geralyn Coticone and Lois Schaefer. She can be heard on the Chandos, Naxos, New World and BMOP Sound labels. Her debut solo recording can be heard on the album In Media Res in a piece written especially for her by the composer Lisa Biewala, long time BMOP collaborator and Prix de Rome winner. In the summers, Rachel performs at the New Hampshire Music Festival and teaches at the Greenwood Music Camp (Junior Division). Rachel and her husband, the violinist Charles Dimmick, have a young daughter, Chloe, and two naughty cats who occasionally object to her practicing high notes on the piccolo.

Praised by the Boston Globe for his “cool clarity of expression,” violinist Charles Dimmick enjoys a varied and distinguished career as concertmaster, soloist, and chamber musician. As one of New England’s most sought after orchestral musicians, he is concertmaster of the Portland Symphony and the Rhode Island Philharmonic, co-concertmaster of the Boston Pops Esplanade Orchestra, and has held guest concertmaster positions with Arizona Musicfest and the New Hampshire Music Festival. A frequent soloist, Charles has garnered praise, packed houses, and received standing ovations for what the Portland Press Herald has called his “luxurious and stellar performances” and his “technical and artistic virtuosity.” Recent solo engagements have included performances with the Portland Symphony, Winston-Salem Symphony, Boston Modern Orchestra Project, Arizona Musicfest, Chamber Orchestra of Boston, and the Boston Civic Symphony. As a chamber musician, Charles can be heard collaborating with the Sebago Long Lake Chamber Festival, the Chameleon Arts Ensemble, Radius Ensemble, and Monadnock Music. He lives in Boston’s Jamaica Plain with his wife, flutist Rachel Braude, and their daughter Chloe. Charles performs on a 1784 Joseph Gagliano violin.